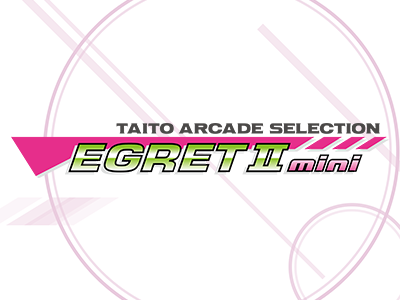 Moving into 2022 with a very special announcement – United Games Entertainment has secured the exclusive rights for the distribution of TAITO’s EGRET II mini in North America and Europe!
The EGRET II mini is the faithful miniaturized home version of TAITO’s famous arcade cabinet EGRET II and will be available in different exclusive editions for the Western territories starting in 2022.

After already distributing beloved titles of legendary video game developer TAITO like Space Invaders, Bubble Bobble and many others, we are now starting our first hardware release with the Egret II mini that has already received great excitement in Japan.

Coming with special content and features the EGRET II mini is a ‘must have’ for gamers:

• A total of 40 pre-installed games, including classics such as Space Invaders, Lunar Rescue, Bubble Bobble, Darius Gaiden and many more
• 5-inch 4:3 rotating screen (1024×768 resolution) for horizontal and vertical alignment and an optimal adaptation to the selected game
• Joystick adjustable for each game – easily switch from 8 directions to 4 directions
• HDMI output to play the games also on TV
• Two USB Type-A controller ports for the different EGRET II mini controllers (that are sold separately)
• Power inlet via USB Type-C port
• SD card slot to add even more games
• Own integrated sound through stereo speakers
• Instruction panel for exchangeable instruction cards
• Special ingame features like: Save states, adjustable lives and rapid fire

Games, Games and more Games!
In addition to the 40 pre-installed games on the console, 10 additional games can be added through an SD card that’s included in the EGRET II mini Paddle and Trackball Game Expansion Set, coming with Strike Bowling, Arkanoid, Plump Pop and seven other TAITO classics. This adds up to an incredible total of 50 games of various genres, from 1978 to 1997 that will be available with the launch of the EGRET II mini!

More details about the different editions, what they will contain and where to get the EGRET II mini will follow soon!