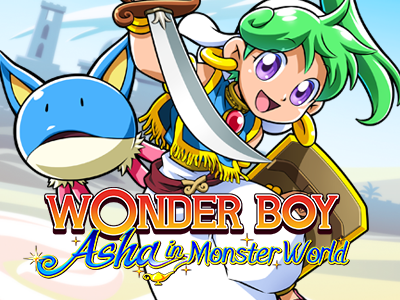 United Games Entertainment  secures the rights to publish the next entry in the world renowned and iconic Wonder Boy series, Wonder Boy – Asha in Monster World.

After recently securing the rights to the unreleased Clockwork Aquario, the upcoming Wonder Boy: Asha in Monster World is now the second license from the SEGA universe. United Games Entertainment has secured the rights for the release in the Western World for PlayStation4 and Nintendo Switch. Wonder Boy: Asha in Monster World will be released under the ININ Games label.

In recent years, the remakes and sequels of Wonder Boy have become smash hits around the world. Several hundred thousand happy fans celebrated the return of Wonder Boy after the series was dormant for many years.

United Games Entertainment is very happy to expand the cooperation with SEGA, LAT and STUDIOARTDINK. Especially since the original staff from the former Westone Bit Entertainment gathered together to create this game to stay true to the spirit of the original games. The team is led, and directed, by the creator of the Wonder Boy series, Ryuichi Nishizawa and supported by Shinichi Sakamoto (sound), Maki Ōzora (character design) and Takanori Kurihara (creative management).

About the game
Asha, the warrior protagonist of the game, is involved in a serious incident that will affect the survival of her world. Our green-haired heroine doesn’t have to save the world all alone, and sets off on an adventure with her cute flying friend, the blue Pepelogoo. Asha and the Pepelogoo have to work together to become the heroes the world needs them to be. The road ahead is long – will they be able to save their world?